Catching Pike on Lures in Winter

Catching Pike on Lures in Winter

Catching pike on lures in winter can be great fun and helps to keep warm. So first i shall cover the aspects of a pike in the natural world and there behaviour changes in different seasons throughout the year.

Commonly found in Northern America, Pikes are fishes that have a long and powerful body. They have a big mouth full of sharp teeth. They are constantly on the lookout for prey. This is why; pikes are viewed as greedy predators.

Pikes are called by different names, namely water wolves, dragons, toothy or freshwater sharks. Different from regular fishing, pike fishing involves a lot of thrill and action. Today we will be glancing through some sure tips and strategies for winter pike, which will make your fishing experience enjoyable and memorable one.

Even today, anglers are divided on their views as to which season, summers or winters are favourable for pike fishing. However, we recommend Pike Fishing during the winter season. Here’s why:

Amidst this situation, if you were to catch hold of a pike, considering a pike’s nature, it is evident for the fish to give you a tough fight and not be caught easily. In the process of creating resistance, the pike is likely to feel tired and exhausted, which may lead to mortality. In the warmer seasons, pikes are remarkably active in gulping down baits as also tricking the angler.

In the winter season, the situation reverses. Pikes are much relaxed and lazy as the water is cool and calming. As compared to summers, pikes show very little resistance when caught in winters. Hence, if you have an option to choose, then you should opt for winter pike fishing instead of the summer one.

However, another point worth noticing here is about the temperature of the water. The water temperature plays a significant role. Accompanied by the season and climatic conditions, we are going to get in some detailed discussion on the tips and strategies for winter pike.

SPECIALIST ANGLERS SUGGEST THE MONTHS OF OCTOBER TO MARCH AS THE IDEAL PERIOD FOR WINTER PIKE FISHING.

Best Pike Winter Lures to Have On Your Box

Slow Sinking, 16cm Can be Counted Down to Depth

These lures are chosen specifically for targeting pike in the Winter. As the temperature drops, poke become less active and regularly lay close to the bottom. A good indication of this is if you bank a poke the belly has leeches clinging to the fish.

The selection of lures can work extremely well as they are retrieved slowly, but still generate large attraction of vibration or sound in the water. With either large pulsating flexible tails or loud rattles incorporated within the lures. These triggers are the difference between a pike ignoring the lure or provoking an attack.

When you set out pike fishing during winters, it is crucial for you to know the lake you will be heading to. This is because not all lakes are the same.

Firstly, you need to decide what your agenda is as far as pike fishing goes. If you are an angler, who is looking forward to exploring a habitat that sees pikes in large numbers. Then the lake you should be heading to will not be the same as the lake where only a single big pike can be found.

Once this point is clear and you get to the appropriate lake, winter pike fishing will be a success for you. Most new anglers visit the wrong lake, are unable to get the desired outcome and conclude that winters are unsuitable for pike fishing. Hence, this is an area of significant consideration.

Pikes are most active in a good light. Hence, if you are keen on creating a worthy winter pike fishing experience, then it is necessary for you to look for clear waters. If the water is dark, pikes become dormant. It is difficult rather impossible to fish for a dormant pike.

On the other hand, catching the attention of an active pike and luring it towards the bait is much easier. This is another tip you need to abide by if winter pike fishing is on your mind.

The best way of pre-baiting is to leave chunks of food at certain locations. This is something you cannot just do for a day or two. You have to continue with this practice for several days.

Unlike other fishes, pikes respond to this trap differently. If they find out that food is available at a certain spot, they might program themselves to visit the location and gulp down the food every day same time. Hence, it would help if you altered your timings as far as pre-baiting goes.

Note: Make sure better to acquaint yourself with the pre-baiting regulations in your territory.

Another reason why winter pike fishing fails to work for most anglers is that they do not consider experimenting on their fishing techniques. Let us say; it is winter in your region. You decide to go pike fishing and follow a very aggressive approach. What happens next is that you return home empty-handed.

Are you blaming the climate for your failure? If yes, then you are sadly mistaken.

In winters, fish are less active and slow. Hence, an ideal tactic here would be fish slowly. Since you are doing the exact opposite of this; you are unable to catch hold of pikes. In addition, do not forget to try different fishing techniques in different lakes.

For a fishing technique to give desired results, the lure that you are using also plays a big role. It is difficult for you to get your hands on the perfect lure in the first find itself.

Hence, what you can do here is to use different lures interchangeably. You can switch between spoons, spinnerbaits and swimbaits. The lure that is able to assist the most with winter pike fishing should then become a must-have in your tackle box. And this is one of the less spoken tips and strategies for winter pike.

Tips for Catching Poke on Lures in Winter-Rivers

Lure fishing on rivers for pike can be a slightly different approach.

Mild grey days in October many fish species are still active, so here is the thing, getting a bait ball of smaller fish into a swim is a big attractor for larger predatory species that creates uts own food chain.

Using a groundbait of just brown breadcrumbs mixed in a bucket then rolled into golf ball size spheres and thrown into the water in the areas you intend to pull your lures through is probably the best thing i have ever do.

Before long small fish start gathering eating the bread crumbs, then perch, bass and small pike move in to feed on the small fish.

before you know it a large ball of active fish darting around are present.

This creates one hell of a underwater commotion putting out a huge signal throughout the water surrounding that a feeding frenzy is happening.

Bigger pike pick up all this underwater data through there lateral line that runs both sides of its flanks.

Basically its a huge dinners up  bell banging through the water.

Yes!, this is like a miniature version of a scene from the Blue Planet, and it happens.

Knowledge for the lure angler. Think about that pike do not like to use up to much energy. They are trying to build up fat reserves for the coming frosts and ice.

It appears to me that small fish would take up too much energy and having to catch quite a lot to get the fuel they require.

So this means they need something subtatial, and as we have smaller predators each the small fish they must be the big pikes target Right!

I find that perch, pike imitations work the best or a large silver fish are what the big boys are hunting.

Here are the selection of lures that will have your rod bent double. 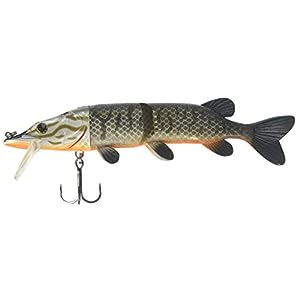 Unbelievable action and pike love em. Work with a steady retrieve with a pause for best results 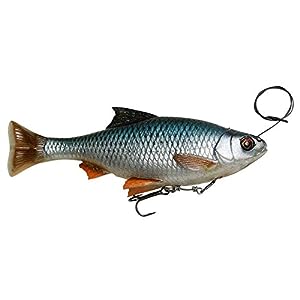 Roach $D Line through has a almost identical swim action of a real fish. slow,quick and steady retrieve.

If winter pike fishing is on your mind and you do not want your efforts to go waste. Then be very particular to follow the entire dos and don’ts mentioned above. If you keep these tips and strategies for winter pike in mind, you are sure to bring home a pike this winter.