Topwater pike fishing with lures is the most exciting way to catch these in credibly fast predators.

The pike angler is a special kind of fisherman because this fish is a law unto itself.

You’ll need to adopt different tactics to land the pike of your dreams and these tactics must also differ throughout the course of the year.

The pike is a stunning fish, a highly adept predator which lies in wait ready to ambush its prey at a moment’s notice.

They have been stalking the waters of England for over 50,000 years, each with its own individual markings, unique just like a human fingerprint.

The average pike caught ranges between 5-10lbs but they are known to grow much larger and some lucky folk even catch ones up to 25lbs. Imagine that photograph!

A fish of this predatory nature and substantial size is a sight to behold when in action.

These beasts have a tendency to thrust up from waters below and catch smaller fish, amphibians and even rodents on the surface and the action will be explosive.

When this skill is unleashed on your lure, it can be breath-taking to watch!

So as far as a spectacle is concerned, there are few better ways to enjoy pike fishing than topwater fishing.

year-round, with some preferring winter months when it is a real challenge with the inclement conditions we suffer here in the UK.

But topwater is best in the summer and autumn-time, thanks to the natural aggression the pike harbours in the warmer waters. 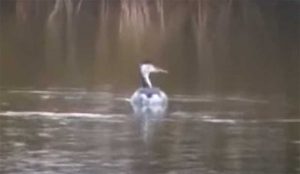 A grebe sitting on a lake keeping a look out for small fish!.

Few minutes later then this!! 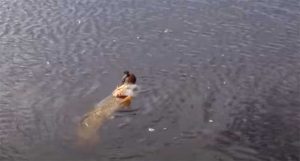 Grebe is seized by a very large pike, after a few minutes the grebe is engulfed whole.

It is better to try this tactic in clearer water but with a slight ripple (not too still) and try to find a spot that has some vegetation nearby to work over.

Surface lures are preferable and you should work it over the water in a zig zagging fashion.

You can even stalk the fish (if you can see it!) if you want to really make this an exciting experience.

Cast to an area you think the fish will be loitering, and do not forget that they tend to stay in groups so if you see one, there may be more lurking.

Triggering a pike attack on your lure can be done by twitching it, mimicking the movement of its prey in distress.

These jerking motions can make it seem like your bait will be a straightforward capture and will encourage the pike to strike. They like nothing more than an easy meal!

Experiment with many different types of action, twitching, jerking, stopping, starting and reeling as these can all draw the pike in.

Keeping calm and being still can also be the difference too as they will often strike at that point once you have gained their interest.

Be warned though – pike fish can often be a very bad aim and will miss your lure entirely!

That just gives you the opportunity to keep trying though and you’ll get a good look at the beauty in the process too.

Topwater fishing is an exciting way to catch your pike and means you can enjoy the sport in the summer months as well as throughout winter. So why not get out there as soon as you can!

Large sized spoons can be fished on the top by retrieving them across the surface in a deadly side to side skimming manner.

A Large 80g Pike and Catfish spoon fitted with strong split rings. Mainline swivel size 4/0 treble hook with streamers.
Creating lots of tubulance in the water with attractive reflective flashes.
Fishing high in the water hold your rod up at about 45 degrees and wind quickly if you are hunting pike.
Strikes are hard and strong.
Deeper water come also be covered by allowing the spoon to sink a few seconds, then retrieve at a medium speed with fast pulls and occasional pause for the spoon to flutter down.

In certain water conditions it is possible to stalk the pike and this increases the excitement of the method being able to cast directly to a lurking fish.

The whopper plopper is a super topwater pike lure that creates a devasting disturbance on the surface of the water. Widely use in the USA for musky and northern pike UK’s native pike also fall for these deadly lures. Rear tail fin is a propeller that slaps down on the sufaces when retrieved. This creates a plopping sound and its noisy. Attracts fish from quite a distance away to investigate the commotion.

There are many tricks to try in order to trigger a take.

Cast to a likely looking spot and allowing the lure to rest for just a few seconds, then, giving it a twitch, pause again before starting to retrieve, just in case the lure has landed very near to a fish.

Numerous times this has brought instant hits from a very angry pike. 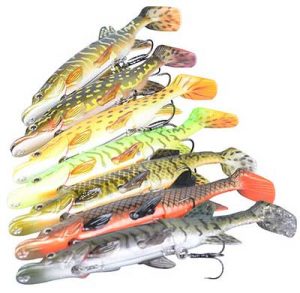 Super realistic Baby Pike imitation loaded with innovative features! Unparalleled 3D Scanned details will fool even the most vary predator fish and ensure you brutal attacks. The Paddle tail will give the lure an incredible lively

Then a pike feeding frenzy starts bait fish leap from the water all at once usually followed by a big swirl or the pike swimming on the top of the water before bursting away.

I have seen this often in early summer mornings and it really has your heart racing with excitement. 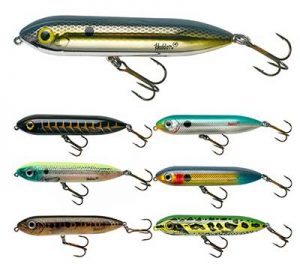 Heddon Super Spook Lure are perfect for attracting hunting pike to execute dramatic surface strikes. Made of strong, hard plastic, this 4.5” lure is perfectly sized for all musky, pike and bass and produces a smooth “walk the dog” action that drives predators into kill mode.

Stop, start, short pulls, twitches or continually reeling the lure back in will all bring up pike. Just keep changing tactics with retrieves, even taking your time to reel a lure in.

The fish might just crash onto the lure, if not try a sudden stop start trick this can result in a take. 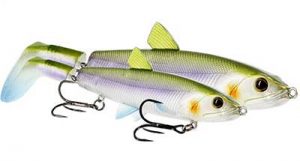 The HypoTwist is a super-realistic topwater hard lure based on that old favourite, but with a separate soft shad tail that has incredible movement the second it hits the water.

The fact it’s rotating at the back of this lure also helps to create a real racket on the surface, causing plopping sounds and disturbances that will stir the predators lurking below. You can fish HypoTwist fast or slow and with pauses if you like.

Occasionally I will slow my retrieve to an almost standstill and ensure that the lure does not disturb the surface.

By doing this you’ll often see a green silhouette of a curious fish in the calm water behind the lure, then suddenly bursting the lure forward can provoke the fish.

On rare occasions a pike has taken a plug that has not been moved for a few minutes, only surface film on the water making the lure move.

Don’t be concerned either about rapid retrieves, you can’t reel too fast.
There is one thing you will learn when fishing topwater lures and that is that the pike are a poor aim, when it comes to hook ups on the strike.

A i mentioned, pike are voracious predators eating anything it can assume is food. Ducklings, rats and frogs are all on the pikes menu.

All along the banks of rivers, lakes and canals one this you can be sure about is rats or voles have trundle across at some stage in time.Pike are far from stupid and regularly recognise these furry mammals as food.

Using rat imitations might seem ridiculous to the untrained lure angler, but pike love to eat them and are a big part of there diet.

Lures available are pretty good but there are always the one lure you have confidence in using. For me its got to be the floating rat by savage gear. 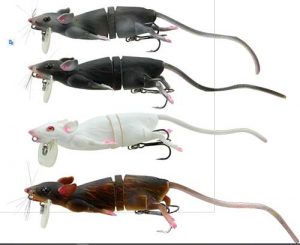 Just as good as the real thing, the Savage Gear 3D Rat Floating Bait Topwater Crankbait uses 3D scanning to imitate the physiology of a rat to the utmost accuracy.

Combining its lifelike appearance and motion with its unique body design that calls fish from all directions, nothing can beat this rat-like lure.

Rigged with a top hook option, it is extremely lethal for surface hunters such as bass, pike and musky. It is available in 2 sizes and 4 colours for added number of applications. This 3D rat is nothing but pure awesome!

Keep a eye out for ducks sitting on the water with there chicks. This is a time that pike are fully aware of the presence e days with some of excellent lifelike models that pike will happily take.of the ducklings and do like to make them a tasty snake. Duckling imitation lures are regularly available.

Lure fishing with duckling replicas is best along side reed beds or close to foliage hanging in the water on river banks. Pike naturally seek duckling in this cover as duckling hug these spots for protection and safety.

My one for the job is another westin lure called suicide duck. These are great lures and catch many pike. 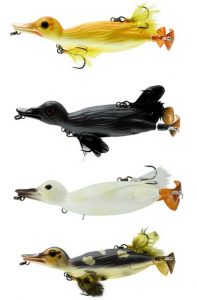 The Savage Gear 3D Topwater Suicide Duck Topwater Crankbait mimics a fleeing duck just waiting to be plucked out by the predator.

Just as good as the real thing, the Savage Gear 3D Topwater Suicide Duck Topwater Crankbait uses 3D scanning to imitate the physiology of a duck in utmost accuracy.

Combining its lifelike appearance and motion with its spinning feet that throw water in all directions, nothing can beat this duck-imitating lure.

Rigged with customisation top and bottom hook configuration, it is extremely lethal for surface hunters such as bass, pike and musky. It is available in 2 sizes and 4 colors for added number of applications.

This 3D duck is nothing but pure awesome!

Here is some clarification that pike love making a meal eating ducklings.

Late spring is a perfect time to try from immitations. targeting areas of lilly pads and reed bed is likely places pike will lurk in ambush for such prey.

There are good realistic lures available, but one of my favourites is freddy the frog by westin. 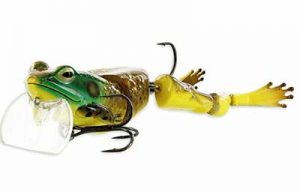 Freddy’s body is 9cm (3 1/2″) in length, with the free-moving, jointed legs taking his total length to 18.5cm (7 1/4″) making him a versatile snack for predators of all kinds who hunt on the surface, including bass and pike.

Many is the time I’ve had more than ten or more fish appear to chomp my lures and only three or four have engulfed it.
In fact, large pike don’t miss very often. Mind blowing it can be but heart stopping excitement just the same. You have to experience this and trust me you will not be disappointed.

Considering have a go at topwater pike fishing with lures that definitely work will dramatically increase your Adrenalin, These lures i have picked out cover all the angles you should try in a session.

Buy the lures, make sure you have a good landing net and unhooking mat plus long nose unhooking pliers. These are the things that come with you every time you fish for pike. Now you have it, go and catch some pike.

pike-frenzy,com is a participant in the Amazon Services LLC Associate Program, an affiliate Designed to provide a means for sites to earn advertising Commission Income by advertising and linking to amazon.co.uk, ebay.co.uk